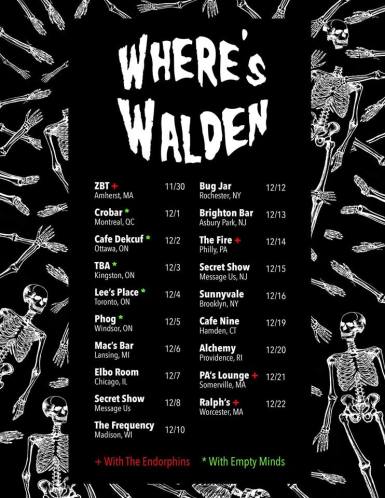 Where’s Walden is an Amherst, Mass., band on tour Nov. 30-Dec. 22, mostly on the East Coast and in Canada, but with a few Midwest dates thrown in there.

On their latest, Brux, you’ll find some heavy (or heavy-ish, depending on who you’re asking) guitar riffs and some really nice, clearly sung, well-directed lyrics. There’s a lot of sitting on porches, hiding away, some tactile memories, some real loneliness: “Drove to the south shore or to somewhere that I forget / the lonely oceans rolling waves lonely hearts in time we’ll save / walking through windows searching for the things that we have left / dead reams in blue / I dream of you,” goes the last line of “Rockies,” the record’s last song.

Where’s Walden describes itself on bandcamp as shoegaze/post-punk/closets and bedrooms, but there’s really not a lot of gazey meandering on this record. It all seems pretty planned and executed, the songs are short, and the mix is nice and clean. I find myself wondering what amps they’re bringing on tour, and whether they used them to record. Go see them if you’re in one of these towns!