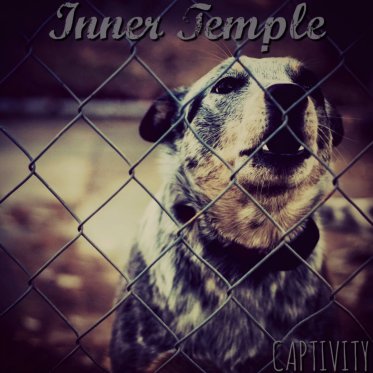 Since Citizen came out with their album Youth in the summer of 2013, many have tried to match the band’s intense guitar riffs, pounding drums, and skillful variation in vocal types. Citizen experimented with bridging the gap between grunge, hardcore, and emo, and in doing so successfully, created a chain of copycats trying to push this hybrid genre forward. Although some amazing music has come out containing similarities to Youth since (one is Can’t Swim’s EP Death Deserves a Name, some bands have missed the mark.

Inner Temple, a band hailing from Wilkes Barre, Pa., released their EP Captivity in October 2016. Upon first glance, you can’t help but notice the unmistakable comparison their album art has to Knocked Loose’s EP Pop Culture (also credited with taking the hardcore scene by storm upon its release–whether you liked it or not). This similarity to the album art was a bad first impression for me. Dustin (vocalist and guitarist of Inner Temple) states that the album art is inspired by a previous member’s pet:

“The previous drummer of the band had a dog named Kimber that he kept outside when it was nice out so that the dog could be outside without running away or into traffic. I would go over to his house for practice, and the dog would be in the cage barking and would be clawing at the cage to get out because it wanted to run and enjoy life. I would look at the dog and say to myself ‘That’s exactly how I feel.’”

This coincides with the lyrics from the title track, “I’m a dog locked inside your cage. I’m losing stability, the only home I know’s captivity.” The photograph for the album was taken about a full year before Captivity had been finished and titled. Sentiment behind the art aside, what this said to me was the band was either unaware of influential music in the surrounding genre such as Pop Culture, or didn’t care. Either way, they took an opportunity to be creative and set themselves aside (picking kickass album art), and instead settled for blending into the pile of albums released with the intent to be Knocked Loose look(and sound)-a-likes.

If an unknowing listener picked up Captivity hoping to hear the aggressive vocals like that of Bryan Garris and the intoxicating beatdown sound Knocked Loose has mainstreamed, they would be misled. The band describes themselves on their bandcamp this way: “Echoing sounds of 90’s alternative rock, out of Pennsylvania booms Inner Temple, an alternative rock band that blends sludgy distorted progressions, emotionally charged lyrics, and heavy patterns together to create their unmistakable sound.” This descriptor, not entirely incorrect, requires further explanation.

Captivity consists of five songs with few variations, if any, in riffs and builds. It comes across as very formulaic, each song sounding as if it was the one before it. The EP almost sounds like a drawn out, repeated version of Citizen’s song “Sick and Impatient.” This was highly disappointing, as each song starts strong, and sounds very different from the start of the previous song for the first 10-20 seconds. However, once the vocals come in, the song falls back into this boring, flat, pattern. We know that Dustin has the ability to do more. In most of the songs, there are these higher, scratchy yells that always start to hype me up. Once it returns to the lower, grunge-like vocals, I get lost again. These heavier vocals, if used more often, would serve the band well.

The best track on the EP is track three, “Your Favorite Season.” This song has a soft entrance that definitely caught my ear more than the rest of the songs. It then leads into a strong buildup that, unfortunately, is once again ruined by the overly deep vocals. If more of the scratchy yells had been included, this song would have made the album hands down.

Also a notable track is number two, “Show Me,” which is the most different-sounding song on Captivity. I enjoyed it because it showed more diversity from the other tracks, though there’s still more room for improvement. The vocals reached that yell I enjoy much more; however, the lyrics were yelled in the same pattern through the entire song with no variation. It made it boring by the end, and I wanted Dustin to showcase his voice more and push boundaries.

Despite the execution, the process of creating Captivity was a huge step forward for the band’s career. The EP was produced by Mat Kerekes, vocalist of Citizen (now it all makes sense). Responsible for mastering the album, Kerekes told the band, “Everything sounds good! The songs rock too!” Dustin says, “That’s when we all collectively had a sigh of relief and we felt that we really had something with that record. It was a great feeling.”

And they definitely do have something special. The strongest part of this album is the heart and soul the band put into it. Dustin labels his lyrics autobiographical and explains that everything he writes is based on personal experiences and emotions. The songs on Captivity deal with depression, anxiety, father-son relationships, and dealing with heartbreak and loss. The lyrics work to explain the human condition through the eyes of the writer as well as grappling with self-hatred.

Another strong point of the album is the cohesiveness of it. Whether you enjoyed the album or not, it’s hard to argue that the band doesn’t have its shit together. This is because of the collaborative nature of their writing. The process went like this:

“Once I had the lyrics and guitar riffs together for the songs, I would show Keeyan and he would put together his drumming. At that point in time, we were without a bassist, so Keeyan and I both did bass on the album. He did the bass work for ‘Your Favorite Season’ and I did it for the rest of the album. After a few run-throughs and idea sessions, we would have a song.”

Their united creative energy is what is going to make this band great, as it is something that cannot be taught. Rather, is only rendered when the right group of people come together with the passion to make something beautiful.