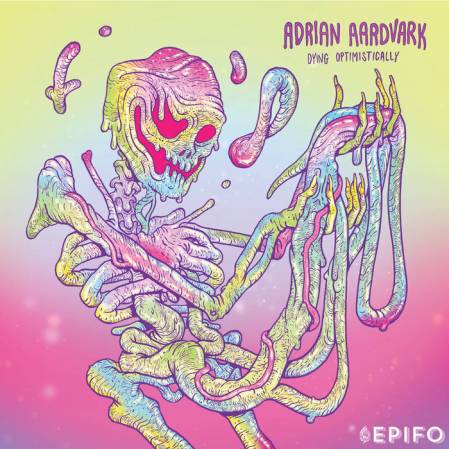 Adrian Aardvark is the jackalope of all trades—wait, what I meant to say was the aardvark of all trades (see what I did there?).

In all seriousness, the latest LP from Adrian Aardvark Dying Optimistically is a slow burn, like the strain your legs feel while climbing a hill on a bicycle: not exhausting, but exhilarating.

Dying Optimistically has all the complex, lovely lo-fi instrumentation of Ariel Pink’s debut Worn Copy, yet is folkier at times. Blending genres of garage, folk, and psych rock, Daz Bird, Catherine Harrison-Wurster, Christopher Stott-Rigsbee, and Shannon Stott-Rigsbee are all multi-instrumentalists, and are able to achieve a full sound, similar to a seven or eight-piece band.

Harnessing the powers of the didjeridoo, melodica, cello, trombone, as well as the classic electric guitar, bass, and percussion, Adrian Aardvark takes us to a mountaintop church, a safe space where we all feel good about ourselves as we reflect upon creaks in a wooden floor (see “Creaky Wooden Floor”) and we’re adept at self-analysis, growth, and positive change.

The tongue-in-cheek, deprecating title Dying Optimistically hints at the album being the group’s own morality play, with the main characters being Self-Love, Individuality, and Romance (Romance as in fluid, complex visions of happiness and complexities of attraction—not the cliched boy-meets-girl scenarios you see on TV).

Christopher Stott-Rigsbee has the deep, baritone, howling croon of Calvin Johnson, immediately noticeable to the listener on the first track, “Just Us”, an us-against-the-world scenario etched with violin melodies in which Stott-Rigsbee makes the surefire statement: “You know my face and I know yours / We run in the same pack.”

This sentiment of making the world your own is contrasted against the introspective downer “If Only” as Stott-Rigsbee sings morosely, “If only my fridge had one more beer / I could slowly sip it down and start to fade away.” The song swells and pulses until it finally crescendos with thumping, locomotive energy.

What made me initially begin to compare Adrian Aardvark to a sort of non-denominational, community-oriented religious symbol was the track “Peace in a Loving Way”, a song sung like a gospel hymn. The lyricism speaks to this truth as well: “Hoping that there can be love and understanding / Not choked in a religious or patriotic way.”

“Young Pharaohs and Horses” follows this theme, as horns and choral chanting continue to weave the tapestry of romantic gatherings in summer where one feels lost and a bit detached from the world.

In Dying Optimistically, there is an a capella track, wild vocal inflections, wild folk rock riffs a la Fairport Convention, and an intense urge for emotional and mental freedom. It’s impossible to describe the group or the album from just one angle. The hunger for everything is what drives this album, and there is a good chance you’ll enjoy it if you feel the same.