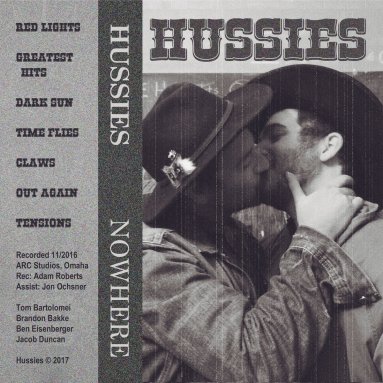 These riffs are the first step in Tom Bartolomei’s (vocals/guitar) writing process. “I usually riff around and try and have a song finished on my end by the time we get together to rehearse it,” says Bartolomei. Then, the writing becomes collaborative. As Bartolomei says, “We’ve been playing together off and on for quite some time though, so if I bring bits and pieces of a song to the table, I know with the help of Ben, Jake, and Bakke we can really flesh it out into a solid idea quickly.”

Despite these solid ideas, the recording process was rather intensive. “Nowhere” was recorded at Another Recording Company in Omaha–the first time the band had worked in a professional recording studio. Bartolomei described the experience as a “privilege” as well as an exercise in “focusing as hard as possible for nearly 12 hours while also heavily under the influence.” Still, they ended up with seven songs out of the 10 they arrived with and also had to re-record the vocals for the chosen seven. Despite the anxiety that came along with the process, Bartolomei said “It was really great working with Adam (of Another Recording Company),” who had been their comrade for this experience.

And their process and focus succeeded. The tape enters with the song “Red Lights,” which is a perfect introduction. The song enters strong and confidently while honing an old-school feel, which really pays homage to the band’s influences. Some of the earliest cited inspirations for them were Radiohead, Fugazi, and Pavement, which all stemmed from the 80s/90s grunge and emo punk-rock era. The sleepy, slurred lyrics are the perfect accompaniment to an overall dynamic tape with each song being distinctly different while also connected through killer guitar solos and dance-inducing energy.

But what’s really the gem of this tape is the sound. When I first sat down to listen, I was immediately hit with the quality of the songs. There was a blaring fuzziness to it, not in the way that it was of bad quality, but akin to standing in a basement listening to a new band. I can only imagine this was the band’s intent, as “all of the music is recorded live,” which I learned in my conversation with Bartolomei.

The band also is choosing to have cassette tapes as the only physical release for “Nowhere.” The reasoning behind this is to help their fans create an experience. Bartolomei says, “if you are listening to a cassette, you are usually sitting down at home and have it running through your stereo. You are there to listen, as opposed to just something to have playing while you are working out or driving around town.” They also offer a digital download, which can be purchased via Bandcamp.

The official release of “Nowhere” will be on Dec. 4 at Pageturner’s Lounge in Omaha. Hussies also has plans of heading back into the studio in the coming month, as well as setting out on tour in the spring. To stay in touch, be sure to check them out on Facebook.